NICOTINE ABSORPTION IN VAPING VS SMOKING

NICOTINE ABSORPTION IN VAPING VS SMOKING

Some studies stated that vaping provides only about 10% of the nicotine compared to smoking - is this figure wrong?

Probably, yes. While I am quite sure that many people get less nicotine than they think they do, it is surly not 10% - e-cigarettes just wouldn't work at that level.

I think a majority actually do step down their nicotine intake when switch to vaping. Some 60 a day former hardcore smokers are now quite happy with, say, 18mg liquid (actually quite low in real terms).

And this might be a better level - not because it is lower per se, but because with smoking the activity is probably excessive for various reasons, such as needing to finish a whole cigarette, only having a short break outside before getting back to the office promptly, and a host of other similar factors (generally summed up as needing to fit in as much as possible because not allowed to partake as and when desire).

What's the likely explanation for the erroneous 10% figure?

Only about 40-45% of the nicotine in e-liquid makes it out of the atomiser and into the vapor. I cut that vaporised nicotine by 25% as an approximate figure for that unabsorbed/exhaled to give 30% absorbed. Still 3x the 10%. So something is being missed in those (not many) 10%-ish studies.

One possibility is that it misses the slower rate of absorption by measuring effect of one 10 minute session of vaping at a fixed point; missing the cumulative value. That's always been my prime explanation. Alternatively, but less likely, some of the nicotine is missed in the analysis somehow - it is there but not being measured; the form may be different; and while it sounds silly to say that perhaps the nicotine recombines with glycols in the blood, perhaps 'something' like this is occurring. But the absorption rate is likely the answer.

How can e-cigs be being successful if the nicotine is much lower than what people were used to?

Somehow that 30% figure still allows e-cigs to be successful for most people (though not all - some can only stick it by increasing the nic substantially, to match what they have been used to). For that majority, what I think happens is: initially, and because of the novelty, the shortfall is compensated by increased volumes - vaping much more than used to smoke (more puffs); so the total nicotine per day (rather than per puff) is raised to near the accustomed value. This pattern of use subsides gradually, slowly enough for the body to adjust (perhaps with a need for a stronger vape in the morning).

So not only have most vapers cut the tar and soot, they have likely also cut their nicotine somewhat too.

How addictive is nicotine?

Related to this is the issue of just how addictive nicotine really is. Perhaps by itself it is not as addictive as generally believed - as evidenced by quite a few people being able to cut their nicotine use to zero in just days or weeks. The really addictive thing could be the combination of nic plus MAOIs (for which biochemistry of this double-whammy makes good sense), with perhaps other factors involved too.

What about the missing buzz I used to feel when smoking an analog?

The 'buzz' that many people feel is missing with e-cigs could be the absence of the nicotine/MAOI 'double whammy', in particular. Even when the nicotine is raised, it doesn't give that special feeling - and this is not about freebase or some other nature of the nic, but the absence of the MAOIs. Alternatively, a slower absorption rate could (at least partly) account for it.

Is the nicotine from vaping really more slowly absorbed?

It is not clear yet, but it is quite likely that this is the case. In the past it had been thought that analog nicotine was faster to the bloodstream (and brain) because it was partly a 'special' freebase (un-combined) form of nicotine; in fact, e-liquid has more nicotine in this freebase form (nearly all). The real reason would most likely be the carrier - with smoking, the nicotine (normally a liquid at room temperature) is carried on tiny particles of ash. With vaping the carrier is a liquid (small droplets of PG or VG in which the nicotine is dissolved (the visible fog of re-condensed vapor).

Not only are the liquid droplets larger than the ash (smoke) particles*, but it is harder for the nicotine to 'escape' the liquid that the ash (the nicotine is sitting on the outside of the ash, so to speak). A further factor comes into play - the smaller size of the particles in analog smoke mean that (much) more of the nicotine reaches the lungs, where passage to the bloodstream is far easier (the barrier is much less here because the haemoglobin of red blood cells in the blood needs to be able to latch onto oxygen from the air; with digestion, absorption of sugars, say, needs to be slower as blood sugar levels need to be tightly controlled, so absorption in the mouth is much slower). 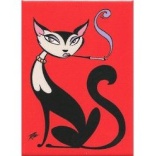